BULLIED BY A 10 YEAR OLD

A Capital One Cup match saw a much changed United side take on 10 year old MK Dons. Nothing new there except that this game was in the second round, something that United have not been involved in since 1995. A result of poor performances last season.

United made a bright start as MK Dons were more cautious as they sat back, dealing with the expected.  Janko and James were effective in their wing back roles and with Kagawa pushing high combining closely with Hernandez and Welbeck this saw Powell enjoy a significant amount of room in front of the MK Dons defence. 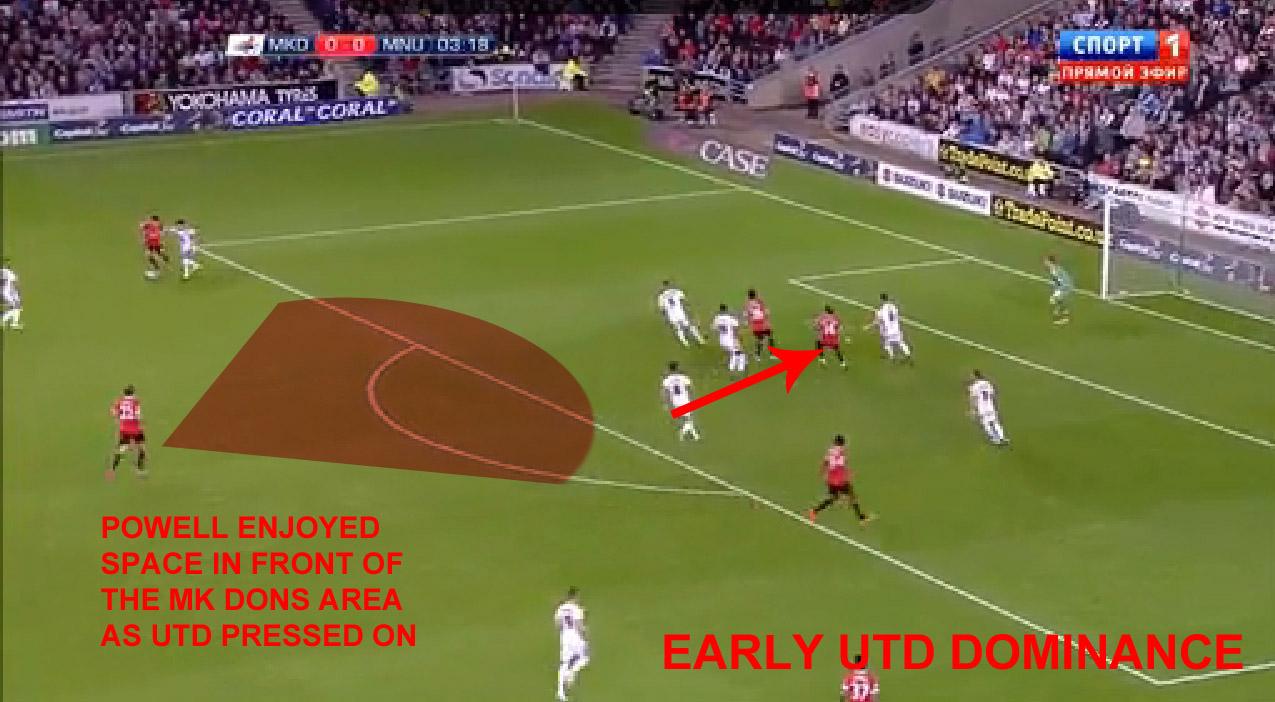 Early on United lost one of their experienced players because of an injury Shinji Kagawa was replaced by Adnan Januzaj, causing a number of changes. One, the link play between Hernandez and Welbeck suffered and two, Powell became marooned in a midfield with Anderson.

The midfield was now being over ran as MK Dons increased their tempo and began by man marking high up the pitch.  This pressure brought about the first goal as Evans showed thoughtlessness in his choice of passes. He tried to pick out Anderson but he was not helped by the Brazilian’s positioning, 5 yards to his left and he would have improved the success rate of Evans’ pass. Van Gaal said: “We made too many errors. I have no regrets about my selection but the changes were risky. 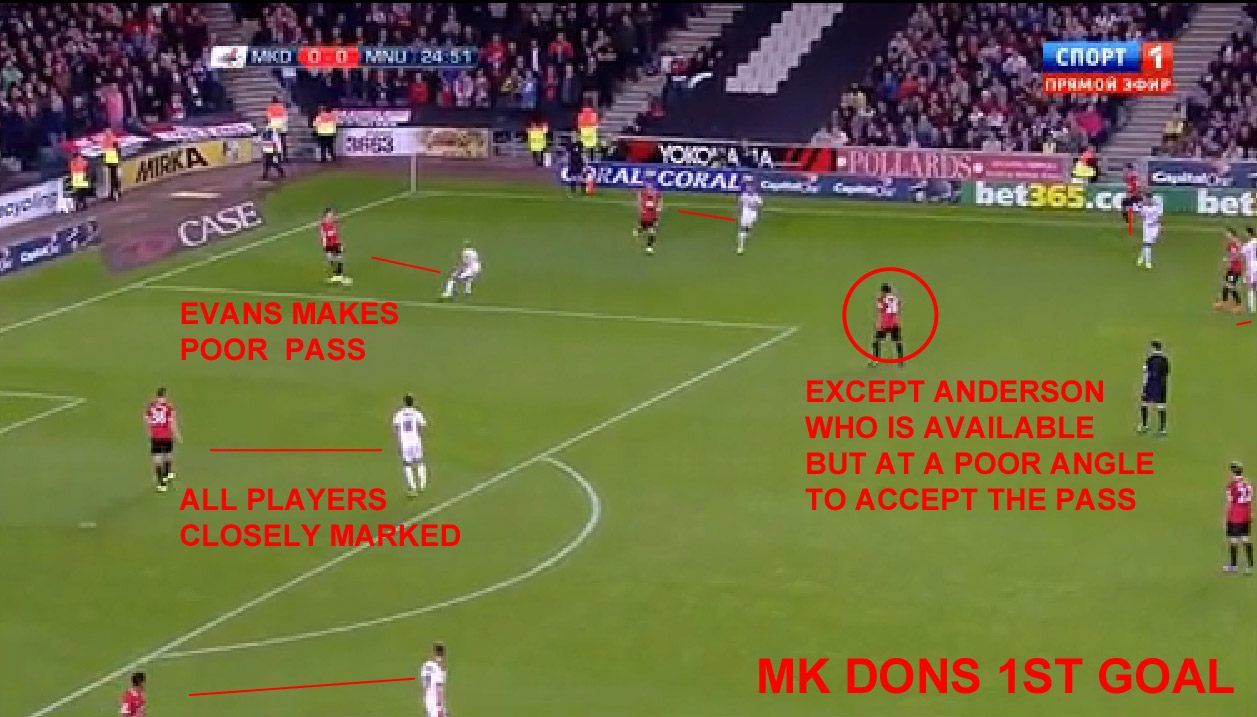 United should have been galvanised by going down and address what was turning out to be  tougher game than they had envisaged. The pressure was telling and there was no consistency and composure o overcome it. This was epitomised by the erratic positioning of Hernandez, who was all over the place, no doubt trying to make an impact in the game.

The trigger perhaps for this movement was MK Dons’ marking which was asking United to play the long ball. This rarely works for United, the pace isn’t there and the ball retention is questionable. The philosophy to which van Gaal refers to requires quick passing, movement and thinking.

However, despite this, at only 1-0 down many reds expected things to get better.

With Januzaj now repositioned out as wing back and Pereira coming in midfield to introduce a degree of craft and drive things, unfortunately, didn’t get better. 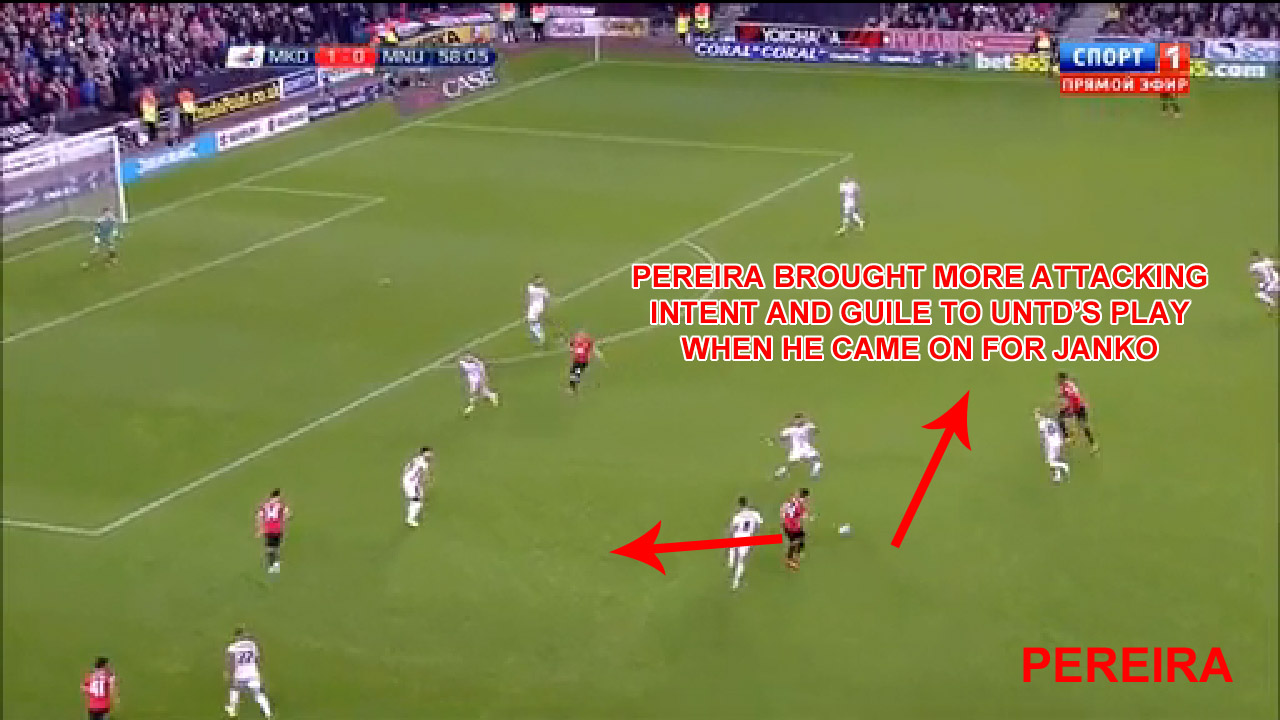 MK Dons seemed to want it more and were playing out of their skins; lots of energy and lots of determination. Often they would have 5 or 6 men return from their attacking transition to form the defence and United were poor and lacking in the wide areas, as well as centrally. 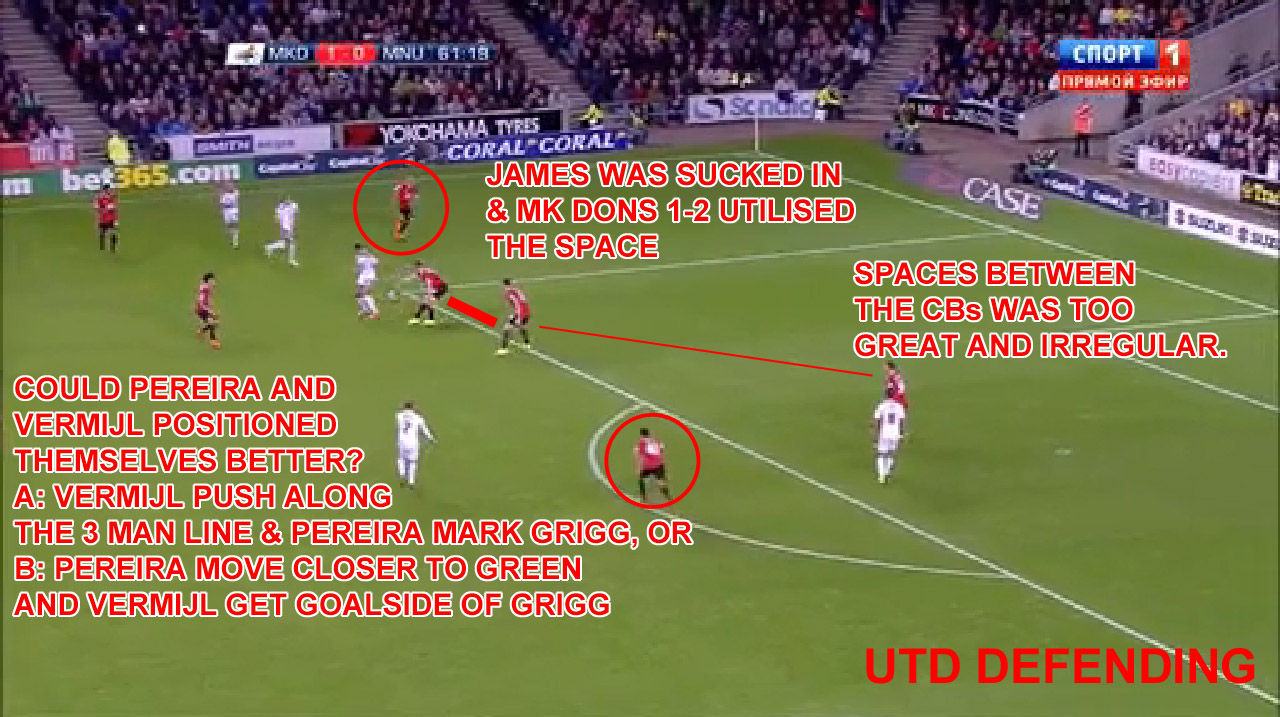 It was looking shaky for United. Again, the wing backs were being exposed and the back three clearly wasn’t working. Van Gaal said he wanted to look at “the second team and youth education”, but it would be unfair to write this crop of youngsters off based on this performance. The youngsters deserved their chance but would a back four have been the better option in terms of addressing what kind of performance would have been expected from a lower league side, in an away match, during midweek? A number of opposing theories have been provided on this topic since the game and both sides have merits but the name of the game is to win and flexible tactics are what van Gaal is known for. So it was surprising to allow the defence to be so exposed.

On a number of occasions Keane was caught out of position and it was one occasion too many that led to the second goal. The shape of the defence in the image below is grim. In addition to Keane being caught out, Vermijl is miles away and Evans is in no mans land, allowing Grigg to control of the ball and lay it off to Reeves.  Of the three centre-halves Anderson is the closest to the player scoring in the middle of the United goal. Even so, Anderson was lacklustre in his attempt to intervene in the cross. 2-0. 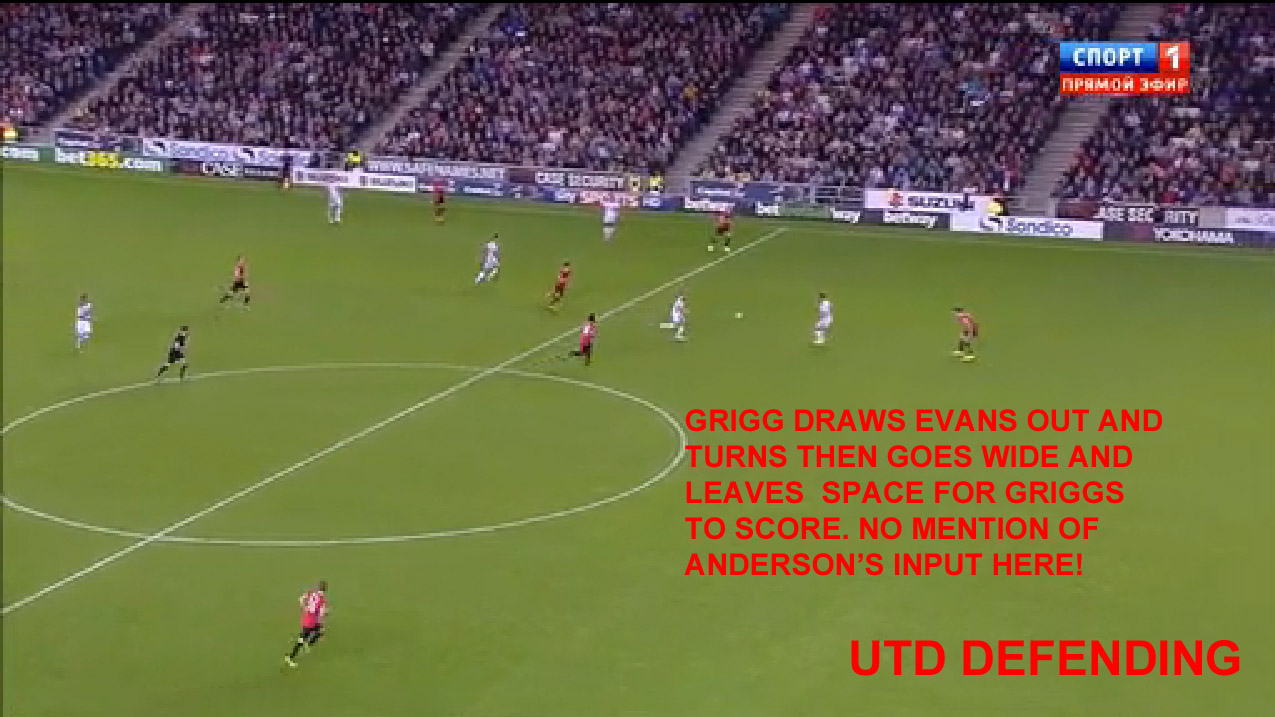 Then it was three!  One of United’s few bright sparks, Periera, was easily dispossessed and this caught United out of position (now the norm in this game) and MK Dons simply attacked the space.  Again, Reeves was involved and he laid off the substitute Afobe to slot past de Gea.

Shockingly, United did not register a shot on target until the 72nd minute when substitute James Wilson (who played well) had a shot saved by David Martin.  Van Gaal’s assertion that he “changed the way we (United) played in the first half. We played one versus one over the whole pitch and when you see that. we created a lot of chances, but we were not lucky,” had classic Ferguson hallmarks about it but honestly to not have a shot until the 72nd minute, United weren’t unlucky, they were poor.

MK Dons played incredibly well, defending compactly and decisively and taking their chances well. The introduction of Afobe was just at the right time. He had pace and power to attack United, nobody stood up to him as he revelled in the spaces the midfield and defence afforded him.

As he made it 4-0 and the final whistle came, we were left mystified and intrigued by van Gaal’s stance that he wasn’t shocked by the result. He must have been the only one. 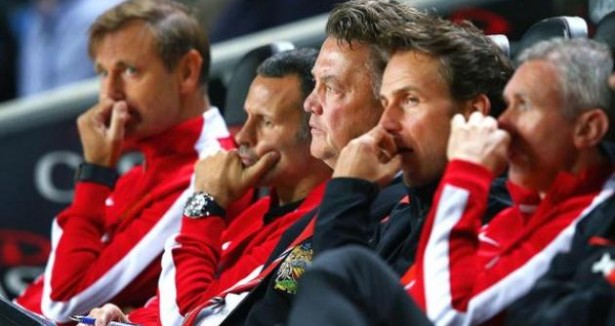 Why was the 3-5-2 chosen for this game? What were the strengths of a three man defence in this game? It is understandable for van Gaal to want the players to adapt but the lack of understanding on the United player’s part would have seen a response to shore up the gaps out wide and create a greate cluster preventing a good MK Dons from working through the many gaps at some point in the game.

At the moment poor ball retention and passing leaves United short, consistently, and for the attack to have a chance the defence and midfield must improve.

The statistic of 7-4 shots on target (source: BBC) in MK Dons favour was a massive worry and it was compounded further in that the first attempt was not until the 72nd minute.

The senior players contributed little whilst from the youngsters, Wilson and Pereira were plus points.

The harsh reality was that MK Dons wanted it more and United showed no fight in the face of it.