United’s last visit to Turf Moor was one to forget. United couldn’t afford a loss this time round. 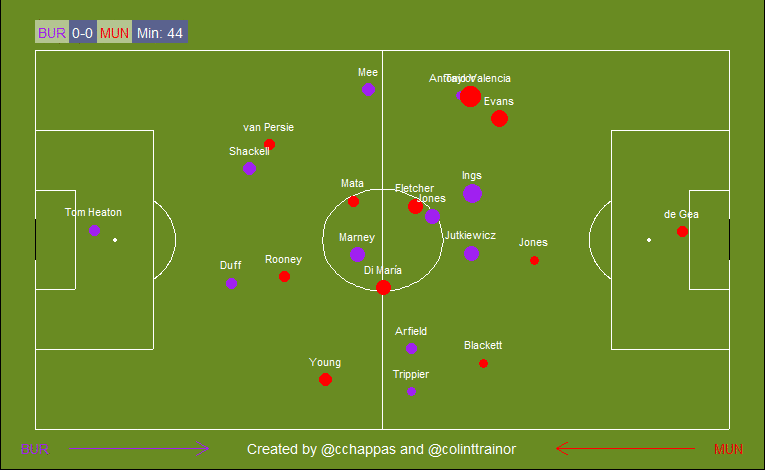 United made a nervy start with a series of errors; a bad pass from Blackett, D. Jones hitting the bar and Evans making a bad pass back to de Gea. These helped set the tone for the first half. 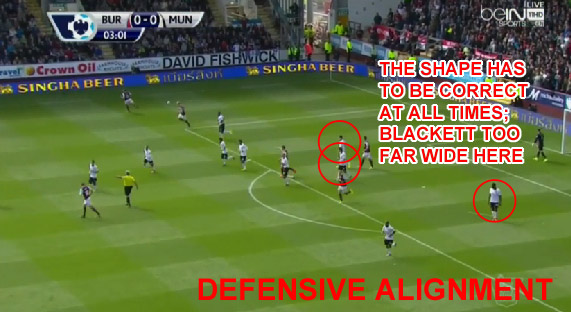 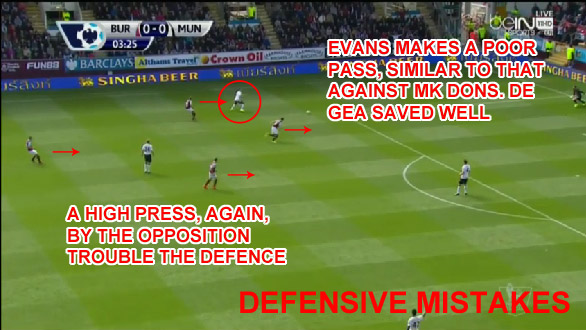 United were 3-1-4-2 but narrow in shape with van Persie and Rooney in front of Mata and Di Maria. 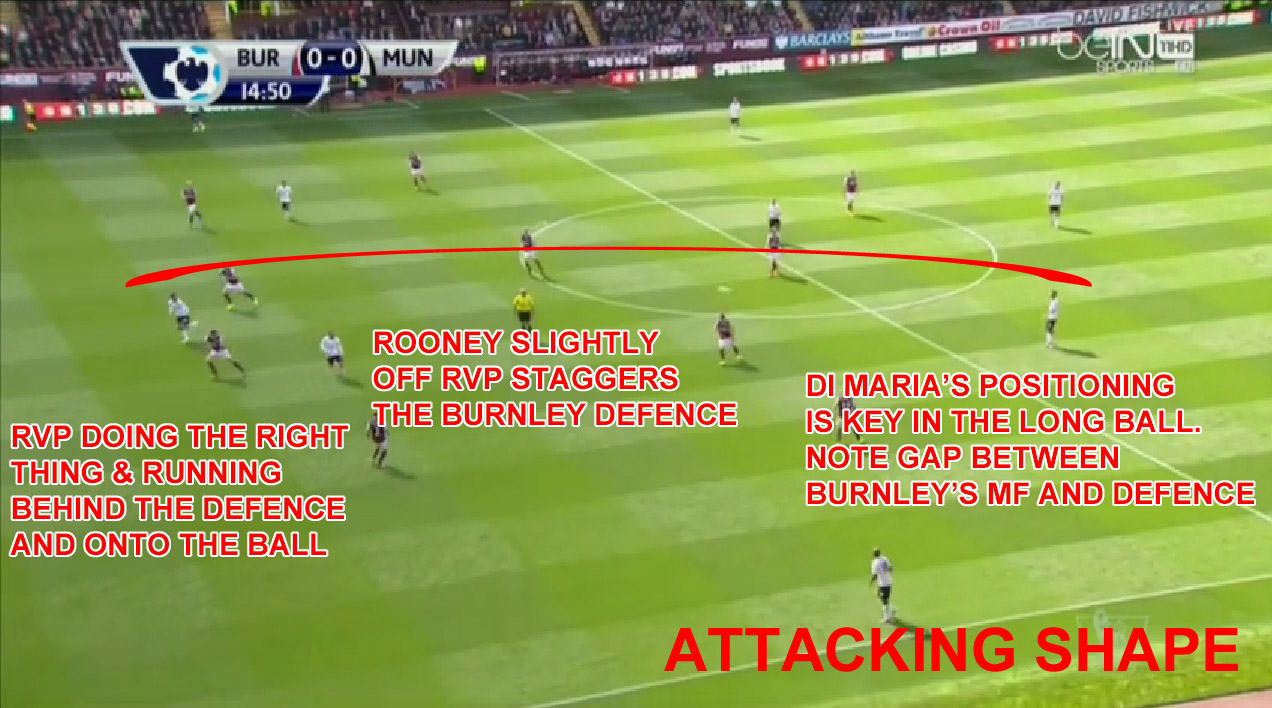 Di Maria was omnipotent and brought more energy to United’s play. He was involved in a a great chance for Mata. However, but for an unfortunate slip, the build up was pleasing. The transfer from the halfway line started by Di Maria was concise and backed up by a follow on run which carried significant intent the likes of which we haven’t seen of late.

The Argentinian brought the best out of Young, who enjoyed a couple of neat exchanges notably with Di Maria and also van Persie.

Burnley were working hard and had significant chances. They pressed the outer most centre backs and Valencia was often tested. This led to the chance for a header by Arfield, below.

To overcome the pressure United often reverted to the long ball. 40 out of 71 tells its own story. 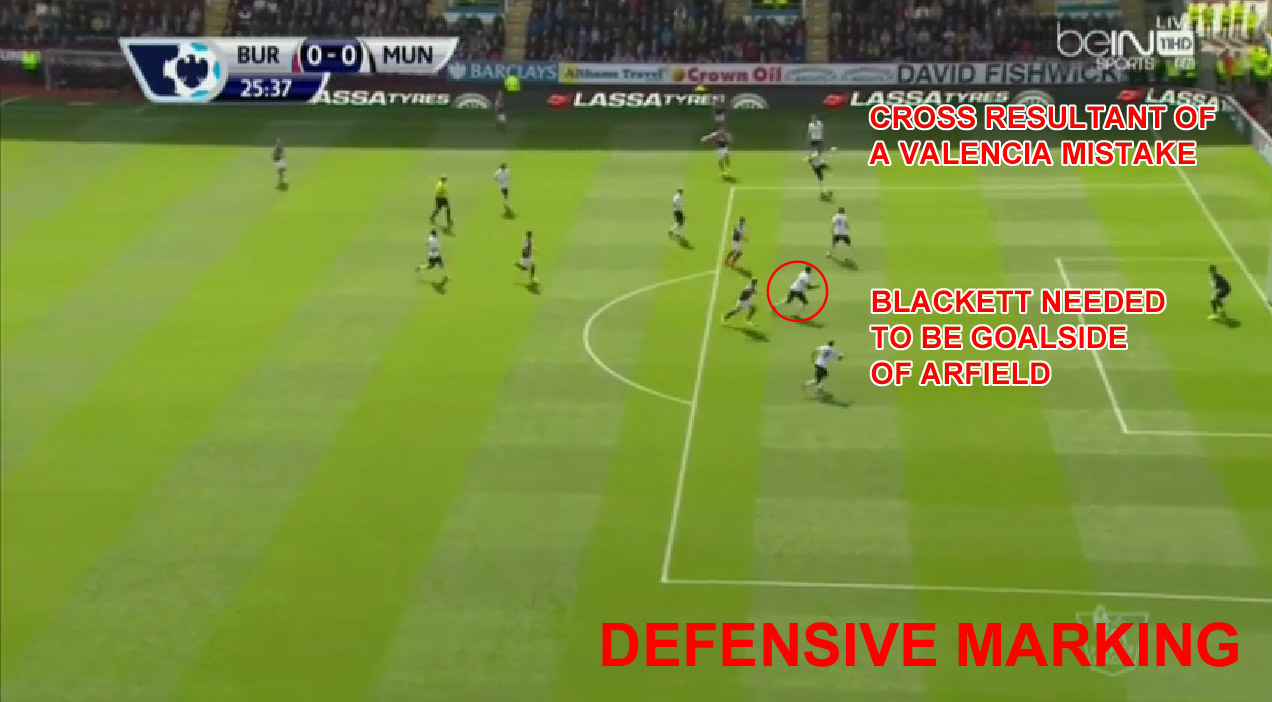 Clear foul on Young to the end should have seen United awarded a penalty.

It was clear from this half that Rooney was the link player in United’s play around the area. 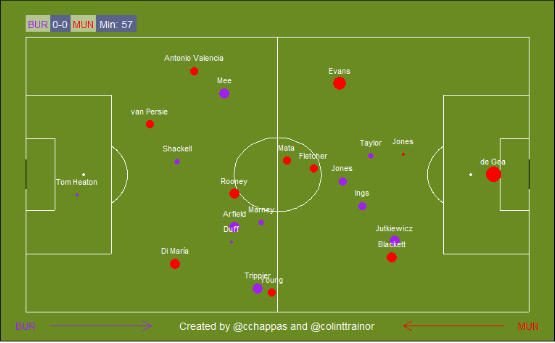 This half saw Di Maria go much wider and higher on the left. On occasion United could be seen in a 3-4-3 formation, rarely though. Until his substitution this resulted in Young being slightly further back.

To the right, Valencia enjoyed a lot of possession (in the last 20 minutes) and pushed Burnley’s right full back, Mee, deeper as a result. Valencia’s ever shrinking weaponry resulted in him offering little threat. Yet he was often seen taking two defenders to mark him. 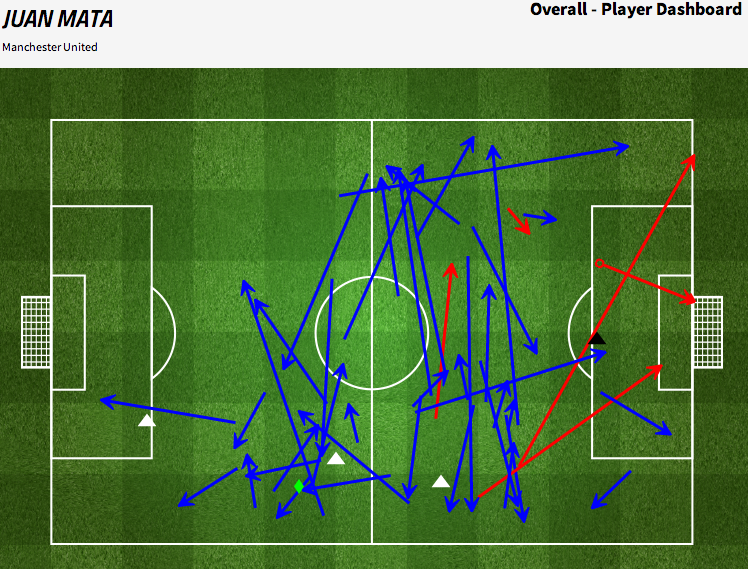 Di Maria aside, some of United’s approach play was not dynamic enough. See Mata who played too many sideways passes.

As the game drew to a close two main changes were made, Anderson, helped in the switching of the ball (mainly to the right) and Welbeck, direct and pacey.

It wasn’t enough to break the deadlock.

Minimal improvement which was more to do with Di Maria’s inclusion rather than the team getting better. Although the clean sheet is good news!

There remains a reluctance to be bolder when in possession starting from defence and too many balls go side to side; but not as many as last season. The top 8 passing combinations in the match involved United players, but were are too far back on the pitch. These are the stats midfielders should be producing. 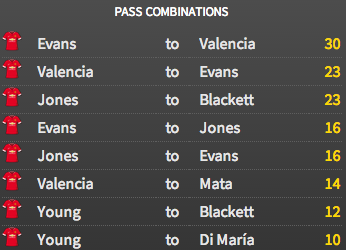 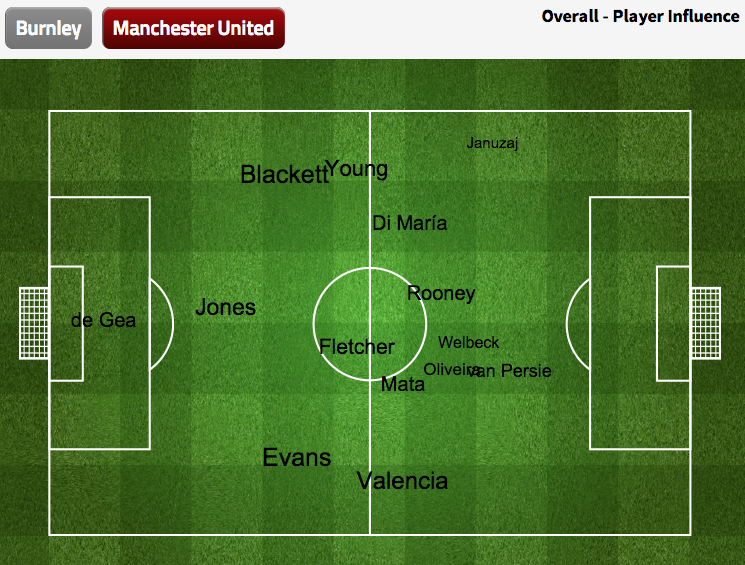 The overall player graphic here shows poor management of space; outer centre backs and wing backs too close whilst also being too far from the centre back.

It was with interest reading Phil Neville’s comments on the 3-5-2 formation, “I am not convinced. It is spreading nervousness through the back three.” (Source: http://www.bbc.co.uk/sport/0/football/28909835)

Will van Gaal go for a back four eventually?